← Back to Clash of Rebellions 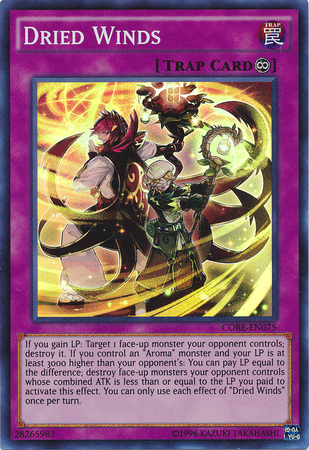 Passcode: 28265983
Set: Clash of Rebellions
Card Number: CORE-EN075
Rarity: Super Rare
Attribute: Trap
Card Text: If you gain LP: Target 1 face-up monster your opponent controls; destroy it. If you control an "Aroma" monster and your LP is at least 3000 higher than your opponent's: You can pay LP equal to the difference; destroy face-up monsters your opponent controls whose combined ATK is less than or equal to the LP you paid to activate this effect. You can only use each effect of "Dried Winds" once per turn.
Card Type: Continuous Trap Card
Name: Dried Winds
Edition: Unlimited
×